Base64 Decode is a free online tool that allows you to convert the Base64 data into a text string, image, hex, or binary.

Base64 Decode, also known as Base64 Converter, is a free-to-use and simple online tool that does exactly what its name suggests. It decodes the base64 data and gives results in plain text. Also, you can use it to convert base64 data into an image file, hex, or binary form. Moreover, it supports almost all the character encoding standards. 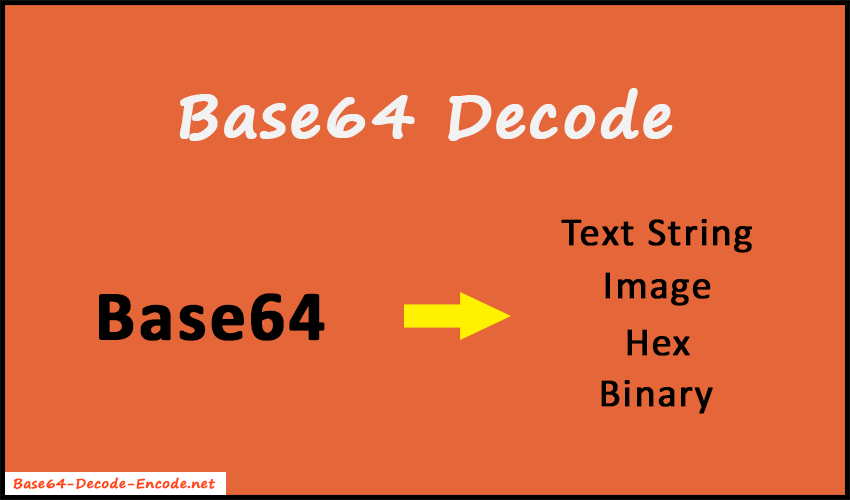 In the world of computer programming, base64 is a set of binary-to-text encoding schemes used to represent binary data in 24-bit sequences that can further be represented in four 6-bit base64 digits. Base64 is used in various applications such as email via MIME and storing complex information in JSON or XML format.

Basically, base64 is a technique of encoding and decoding. It is used to convert binary data into ASCII (American Standard for Information Interchange) or text format, and vice-versa. This system uses 64 digits set that can be represented by 6 bits.

In addition, Base64 is very popular on the World Wide Web and where it embeds image files and other binary assets in textual assets like HTML or CSS files. Our Base64 Decoder can take any form of data and transform it into plain text.

Base64 contains the following:

How does Base64 actually work?

The simplest and hassle-free way to decode base64 data is to use our base64 decode tool. However, if you wish to do it on your own then follow the process below.

Base64 decoding converts plain text into its original form. Technically, it converts 6-bit bytes into 8-bit bytes. Let's take an example to understand the base64 decoding process.

Example: Suppose a base64 string is "QUJD". Decode it into plain text.

1. Firstly, split the string letter by letter. Thus, after splitting the string "QUJD", we get four groups:

3. Now, convert each group from decimal to binary. To do so, find corresponding decimal values in the ASCII table. You should get the following binary values:

5. Now join all the groups and we will get a 24-character string as below:

6. After that, divide the resulting string into 8 character groups. In case the last group has less than 8 characters, discard it. Now, you will have three groups of 8-bit bytes as follows:

7. Lastly, use the ASCII Code Table and convert all binary values into their ASCII characters. Finally, we get:

So, after decoding of "QUJD" we get text output "ABC".

How to use Base64 Decode?

Let's see how you can use this online tool to convert base64 data into a text string, image, hex, or binary.

Features of Base64 Decoder

The actual use of base64 was limited to a safe way to transmit data across machines. With time, it has been integrated into the implementation of several core Internet technologies such as encryption and file embedding.

No, there is no such limitation. You can decode data of any size using our base64 converter.

Simply enter the base64 data in our tool, select the output and character encoding type, and press the "Decode" button. As a result, you can see decoded output on your screen.

Yes, it's very much safe. Because it makes sensitive data difficult to decipher and provides a high level of security.

Firstly, upload your file using the "Open File" button and our system will automatically fetch the file's data inside the input box. Then press the "Decode" button to get the final result.

No, you can't use it offline. Because it's an online tool. So, you need an active internet connection and browser support to use it.

Just press the "Swap" button in the tool. Our base64 encoder will open and then you can input your decoded data and easily encode it.